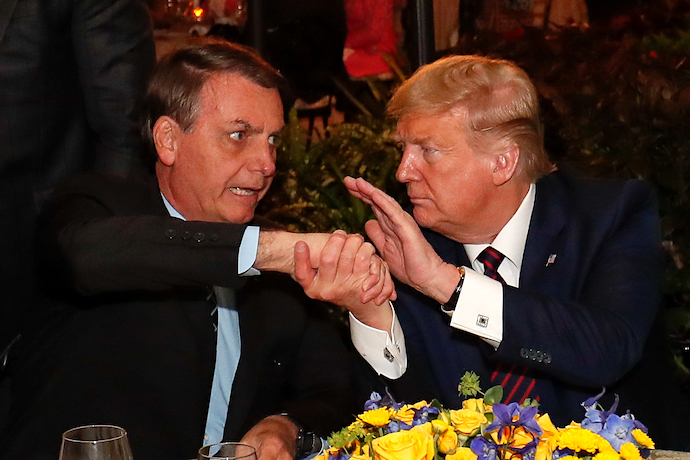 Democracy under threat. That’s the message coming from one of the world’s biggest democracies, and its fifth most important economy.

On Sunday, 8th January 2023, Bolsonaro supporters attacked and ransacked the Brazilian Parliament, in the city of Brasilia.

From the very first moments, it was clear the similarities between the insurrection in Brazil and the one on the US Capitol in January 2021,  though the outcomes in Brazil still remain to be seen.  According to O Globo, 1,500 rioters were arrested on Sunday, many more than in the US, though the Brasilia assault did not register any deaths.

In Brazil, Justice Minister Flavio Dino disclosed that federal police have already identified people in ten states across the country who are suspected of having economic ties to the organizers of Sunday's attempted coup in Brasilia and said arrest warrants have already been issued. The names have not been released. The suspects also allegedly financed the rental of buses to bring the extremists to the capital. Brazil's Supreme Court ordered the arrest of the former military police commander of the Federal District of Brasilia, Fabio Augusto Vieira.

"Selma's party'' was the buzzword that made its way onto social media and was used by supporters of former Brazilian President Jair Bolsonaro to boost support for actions that led to the storming of government buildings in Brasilia. It is a pun between ''Selma'' and ''selva,'' which means ''jungle'' in Portuguese, and is used by the Brazilian military as both a greeting and a warning. Just four days before the attack, a video about ''Selma's Party'' went viral on Telegram. In the clip, a man described the "ingredients" needed for the ''party": unity and organization.

"The Powers of the Republic, defenders of democracy and the 1988 Constitutional Charter, reject the terrorist, vandalistic, criminal and coup acts in Brasilia. We are united for institutional measures to be taken, under Brazilian law. We call on society to maintain serenity in defense of peace and democracy in our homeland. The country needs normalcy, respect and work for the progress and social justice of the nation.”

As we watched the events in Brasilia, our thoughts surely turned to the former Brazilian President Jair Bolsonaro.  But the truth is not yet clear.

Meanwhile, the Brazilian Attorney General's Office announced that it has identified more than 100 companies suspected of financing "the coup demonstration" in Brasilia on Sunday. Money from these private entities, it is alleged, was used to pay for the buses that transported the coup plotters and to help radical Bolsonaristas still camped out in front of army headquarters make their preparations for the coup attempt.

So are just “rogue” private companies to be blamed? No. Fabio Augusto Vieira was in command of the security corps Sunday when Bolsonaristas attacked the Parliament, government and Supreme Court buildings. In the convulsive hours after the attacks the former police chief was removed from his position by the head of federal intervention in the capital, Ricardo Cappelli. National government, federal police officials, and members of the judiciary blamed the prime minister of the federal district, Ibaneis Rocha, for the invasion of Three Powers Square by Bolsonaro supporters. Cappelli reiterated in statements to the media that the riot promoted by Bolsonaro militants was made possible by a "sabotage operation" in the local security forces. Their top political leader was Anderson Torres, who was removed from the position of Security Minister of the Federal District and fled to the United States.

Amidst all of this, the deputy attorney general of the Brazilian Court of Accounts, Lucas Rocha Furtado, has ordered the freezing of bank accounts in the former president's name. The freeze will also apply to the governor of the federal district, Ibaneis Rocha, the former Brasilia Public Security Officer, Anderson Torres, and all financiers of the acts of vandalism that occurred in Brazil’s capital.

Bolsonaro’s extradition has already been called for by Democratic members of the U.S. Congress, including Alexandria Ocasio-Cortez. The former Brazilian president expressed sadness at the Brasilia assault, denying any involvement. He was hospitalized in Florida from 30 December to 11 January for stomach discomfort, and is reported to be ready to return to Brazil.

It’s worth noting that Bolsonaro never acknowledged Lula’s victory and refused to hand over the presidential sash. His involvement in the assault on Brasilia is still under investigation.