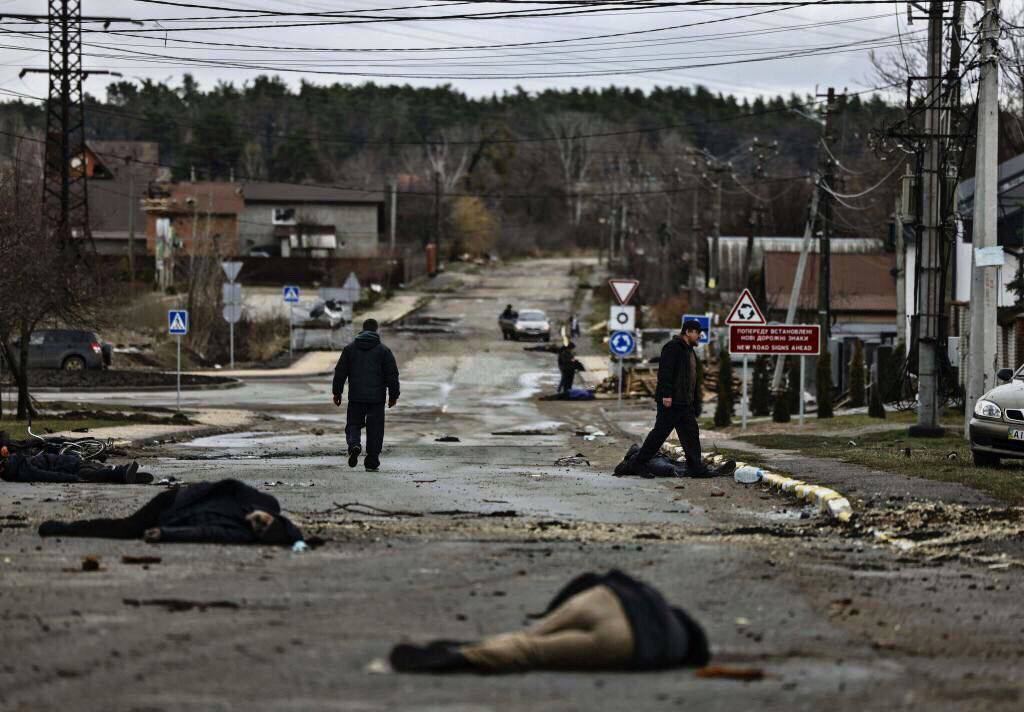 The unofficial website of the city of Bucha, which is run by its citizens, gives us the feeling of small town charm and a feeling of brotherhood. Included are numerous articles on how citizens can choose general practitioners, recipes for a good lentil soup, or events in the local theatre. There are also articles on how the bad roads there are causing accidents, and tips from locals on how to avoid the “flu” (i.e., covid). The website also contains several patriotic works of arts, such as poems commemorating Ukrainian independence, or somber events such as the Holodomor (a man-made famine in 1930s Ukraine, the result of Stalin’s collective land policies). All in all, it is expressive of a small town with a family-like atmosphere, where people simply live their lives.

The website is a window to what life was like in Bucha before the Russian invasion. During the initial phase of the invasion, Russian forces advanced through Bucha in order to get to Kyiv. Over a two week period, Russian and Ukrainian forces fought for control of the city, with Russian forces using a combination of artillery and airstrikes to try to compel Ukrainian cities and villages into submission.

What we now know about Russia’s barbaric attack on Bucha and other Ukrainian cities and towns is actually nothing new. Russia committed similar attacks on civilian populations in both Syria and Chechnya. In its conflicts, Russia typically meets resistance with firepower and terror. On March 12th, NPR published a piece on Grozny that offered a “grim warning” for Ukraine on what the Russians have historically done to civilian population centers. Russia unleashed major artillery salvos and airstrikes that reduced Grozny to rubble. In Syria, where Russia intervened to assist Syrian President Bashar-Al Assad remain in power, Russian bombers delivered devastating airstrikes into Aleppo, famously annihilating the city. What was once the “Islamic Capital of Culture,” is now a city in ruins.

Over the next three weeks, the occupying Russian troops waged terror on the citizens of Bucha. The New York Times shared a video of Russian forces pulverizing an unarmed cyclist as she turned onto a road filled with Russian troops. NPR told the story of a man being dragged from his apartment, made to kneel in front of his wife and father-in-law, and executed by Russian forces. His body lay on the street for the next month, the family unable to do anything with the streets heavily patrolled and Russian snipers covering the area. Others recount Russian forces going door to door in search of young men. Finally, after a successful counterattack by Ukrainian forces, coupled with Russia’s shift in objective toward seizing eastern Ukraine, Bucha was liberated.

When Ukrainian troops re-entered Bucha, what they found in the city shocked everyone. Bodies had laid in the streets for weeks, badly decomposed. Charred remains of tanks and military transports littered the city’s main street, a grim portrait of the new reality of life for many in Bucha. Locals described corpses found without legs, arms, sometimes even missing their heads. Ukrainian investigators found bodies in basements with their arms tied, executed. A mass grave was found in front of Bucha’s main church. As of April 8th, Ukrainian officials had collected 320 bodies in the city, with half of the remains yet to be identified.

President Volodymyr Zelensky visited Bucha after the Russian troops pulled out. Zelenskyy called the massacre a “genocide,” and he asked the international community to witness what had been done in Bucha. In an interview with 60 Minutes, Zelensky described what he saw: “Death. Just death.” He further added that Ukraine is fighting the world’s ability to “live a modern life.” His face, as he walked into Bucha, revealed his sadness and his anger, which provided the basis for his very direct speech to the UN Security Council the following day. He bluntly told the UNSC that it should disband itself if it could not guarantee security and peace in the world. He also noted the irony of war atrocities committed by a member of the UN Security Council.

A few days after Bucha was liberated, Russian rockets struck a train station filled with Ukrainians trying to escape from the city of Kramatorsk in eastern Ukraine. Fifty people were killed, with the images widely spread on social media. Dead bodies of women and children again shocked the international community.

As the Russians redirect their offensive to the Donbass in eastern Ukraine, more and more cities near Kyiv that were under Russian control are being liberated. Judging by the historical examples of both Grozny and Aleppo, what Ukrainians find there is likely to be bad. Indeed, President Zelenskyy said last Friday that what they found in the town of Borodyanka is "much worse" than Bucha.

As for the besieged Ukrainian city of Mariupol in southeastern Ukraine, where Russia has not allowed civilians to leave, nor food or medical aid to reach those trapped: President Zelenskyy is estimating that tens of thousands have been killed in that city.