NATO: why Hungary and Turkey, but not Ukraine? 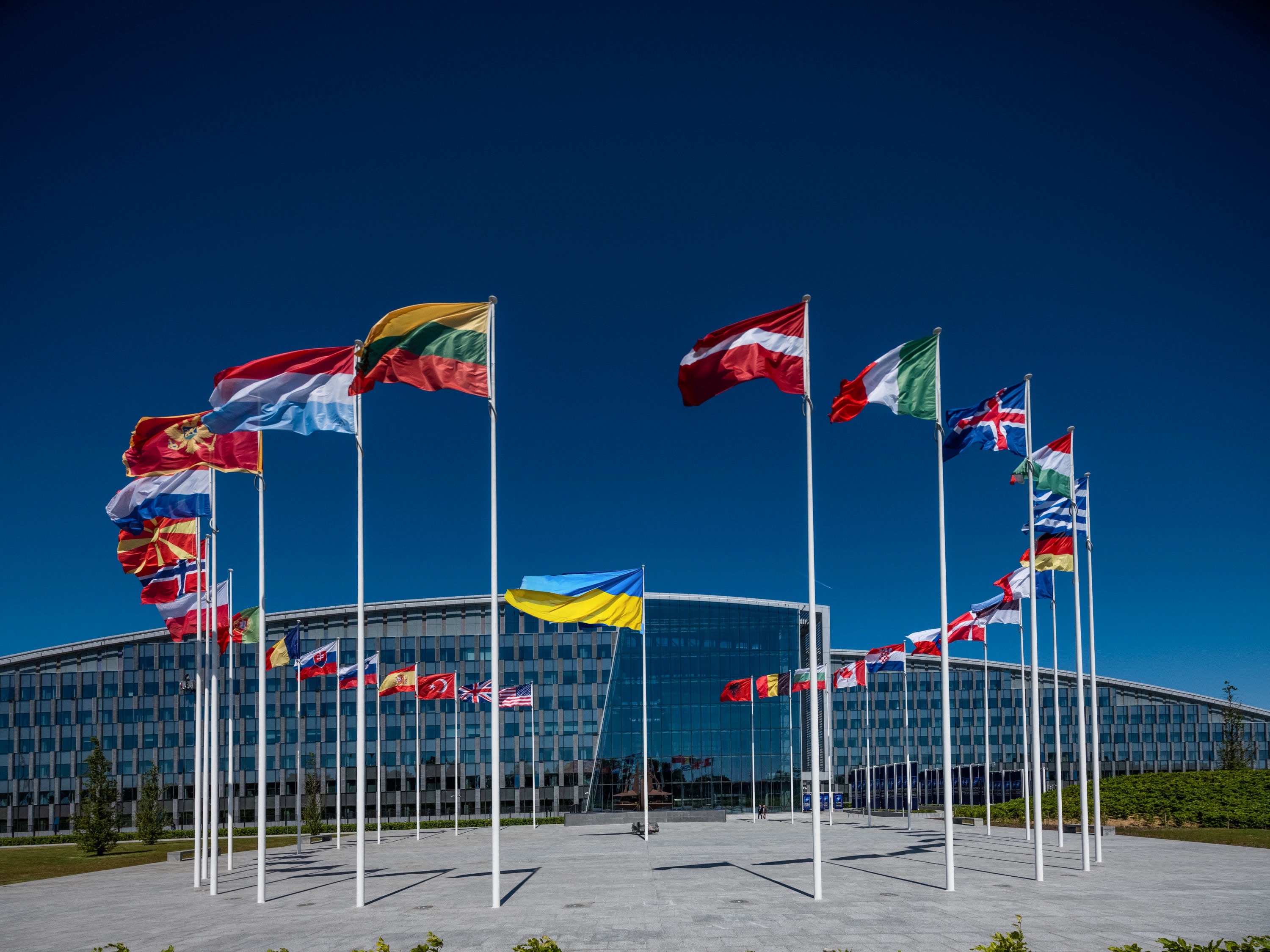 Many of us are wondering what’s driving the decision to exclude Ukraine from NATO. So we began by reviewing the minimum criteria for NATO membership, as laid out by the U.S. State Department. This is how Ukraine checks out:

We’re also told that “The key determinant for any invitation to new members is whether their admission to NATO will strengthen the alliance and further the basic objective of NATO enlargement, which is to increase security and stability across Europe.”

On this last point, Ukraine has proven itself to be of enormous benefit to the rest of the world, and most of all to Europe. The courage and determination of Ukrainians has increased security and stability in Europe by deepening EU solidarity, and by providing a bulwark between Russian aggression and the rest of Europe.

But Ukraine is still not in NATO. The original delay was ostensibly due to the level of corruption in the country. But if you look at other members — notably the UK, Turkey, Romania, Hungary, Bulgaria and the US — and compare their corruption to that of Ukraine, it’s reasonable to be confused.

Transparency International offers a Corruption Perception Index that scores countries according to their level of transparency and public sector corruption. Ukraine scores a low 32 out of 100. But while the UK right now scores very high — 78 out of 100 — it’s also at the top of the list of countries that launder dirty money for Russian oligarchs. That’s a major issue right now in the current crisis with Russia’s invasion of Ukraine. Why does that not get factored into NATO’s criteria or Transparency’s corruption index?

Then there’s Turkey, which scores only 38 out of 100 on the corruption index — very close to Ukraine’s score of 32. And it’s low for good reason. Fraud, embezzlement and bribery are common, all of which create a drag on the economy. While Turkey does have anti-corruption laws on its books, they’re very poorly enforced. Turkish President Erdogan is also well known for regularly using existing democratic processes to further his own political objectives. For instance, filing red notices with Interpol for the arrest of civic activists such as basketball star, Enes (Freedom) Kanter. Is that not considered part and parcel of corruption? Surely should be.

And how about Romania, which scores just 45 out of 100 (again, close to Ukraine’s 32 score). Indeed, Romania has a long history of corrupt and decadent government. Even after the very corrupt Nicolas Ceaușescu was ousted violently in 1989, the country has continued to struggle with abuse of power and corruption. As a result of the numerous corruption cases and lack of trustworthy candidates, Romanian voters are not motivated to vote in elections.

In fact, Romania is ranked the 3rd most corrupt EU member state, behind only Bulgaria and Hungary (both in NATO). In January 2019, when Romania took over the European Union Council Presidency, then-President of the EU Commission, Jean-Claude Juncker, voiced concerns over Romania’s suitability to lead the bloc because of its political infighting and ongoing corruption.

When in 2018 the former Chief Prosecutor of Romania’s Anti-Corruption Directorate Laura Kovesi tried to clean up corruption in the country, she was forced out by the Justice Minister for allegedly damaging Romania’s image abroad for talking about its corruption. But Romania’s in NATO.

NATO member Hungary fails on a number of the five minimum NATO criteria laid out by the U.S. Hungarian Prime Minister Viktor Orban’s homophobic policies and his zero tolerance with refugees have made Hungary neither tolerant nor inclusive. Orban built a barbed wire wall along Romania’s 175-kilometer border with Serbia, closely replicating the one on its border with Croatia, another key refugee passage on the Balkan ridge. And recently, after having promised support to Ukrainian refugees, he decided instead to militarize the border, aborting any plans for support.

Neighborly cooperation does not define Orban’s Hungary. The basic treaties signed with Ukraine at the beginning of the 90s did not keep Orban from rejecting Ukraine accession to NATO. And he has not condemned Vladimir Putin’s war crimes in Ukraine. Compatibility with NATO forces is now also being tested during Russia’s invasion of Ukraine.

Hungary began its transformation from a central to a market economy in 1968 and is now considered by the World Bank to be a high-income country. But the “successful” market economy does not generate proportional wealth within the country. Particularly in the northeastern region of the country, there is inadequate infrastructure, little economic activity, and an insufficiently skilled workforce.

The economic and political isolation of the country makes Hungary one of the EU’s weakest links. Nevertheless, it’s in NATO.

Bulgaria is ranked the most corrupt country in the EU, with a Transparency score of just 42. But it’s in NATO, even though a strong majority of Bulgarians complain loudly about the corruption of the judiciary (86%) and political parties (76%). Organized crime, uncontrolled lobbying and a low degree of media freedom all remain serious problems. And as recently as 2019, the Rule of Law Index of the World Justice Project rated the corruption of Bulgaria’s executive branch as identical to that of Russia.

Finally, we come to the US, a core member of NATO and long-considered to be the world’s beacon of democracy. The problem is that the country’s unconstrained capitalist model and two-party system have effectively institutionalized corruption. The two-party system yields a winner-takes-all result, incentivizing legislation that motivates each party’s voter base, while often reducing the power of the country’s majority. Things like gerrymandering of voting districts, and a system of state electors that can minimize the vote of individual citizens. Historical redlining in neighborhoods was never remedied, which kept Black Americans from building generational wealth. There are racial inequities in the criminal justice system and many prisons are privatized, which has minorities incarcerated at much higher rates. And uncontrolled corporate lobbying and financing of political campaigns proceed apace, along with tax cuts for the wealthiest Americans, despite millions of Americans going without health insurance and the cost of higher education in the stratosphere. America is failing on the first and most basic of the 5 criteria essential to NATO membership: upholding democracy and tolerating diversity.

That brings us to Ukraine. Admittedly, they have real problems with corruption. Serious reform is needed of both Ukraine’s law enforcement and its entire legal system. And Ukraine’s entrenched and powerful oligarchs need to be reeducated as to the benefits of another way of doing things, and the eventual risk to them of not coming along (just look at the fate of Russia’s oligarchs). That will be key to a successful peace and strong future for the country. But things are moving in the right direction.

Few last things to mention here. First, these scores and rankings for the different countries are slippery.

Also, we see that most other NATO members have their own brand of oligarchs. And the richer the country, often the worse the problem. America’s oligarchy is evident. And the UK is hardly as clean as the rankings would suggest, given its willingness to allow its system to benefit from the money stolen from other countries. As countries grow wealthier, the problem is likely to grow. Corruption will always be an issue.

One last consideration. Following Ukraine’s successful 1991 referendum for independence from the Soviet Union, state-owned assets were privatized as the country transitioned to a market-based economy. The ensuing challenge with corruption and its oligarchs mirrored in large part what Russia’s system was, and still is. But that’s been changing, with Ukraine having made significant strides in transparency and the fight against corruption. In some areas, many see Ukraine as now well ahead of many Western countries. That likely scares the daylights out of Putin.

The good news right now is that Ukraine’s oligarchs are united with the country against Russia. And integrating Ukraine fully into a well-balanced Western market model is the best possible safeguard against corruption, America’s poor example notwithstanding.

Erecting barriers that delay or complicate that process are not helpful. Nor is continuing to cite and enforce criteria that existing NATO members clearly do not meet.