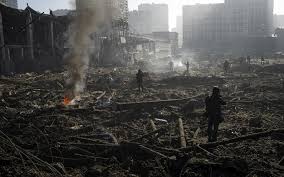 The Russian invasion of Ukraine is not going to plan — Putin’s plan, that is.

Over the last week, from 14-20 March, the Russian military failed to accomplish its major objectives. The major Russian targets of Kyiv, Odessa and Kharkiv are still held by Ukrainians. While the Russians are getting closer to Kyiv, they continue to suffer massive morale and supply problems. Ukrainian resistance is also holding strong, preventing the Russians from advancing further from both the west and the east of Kyiv. Fighting and shelling has continued in the suburbs, with many civilian casualties. A missile reportedly landed in a shopping mall in Kyiv.

The only major gains made by Russia have been in the southeastern city of Mariupol, on the coast of the Sea of Azov. This city has suffered the biggest destruction of a European city since World War II. It is a site of a massive humanitarian crisis, and many consider the events unfolding in Mariupol to be a genocide. In the last week, Russian forces shelled a theater there containing women and children seeking shelter from the war. This was done despite huge signs, visible from the air, indicating the presence of children within the theater. Russian forces have continued fighting in Mariupol, reducing the pocket of Ukrainian forces in the city center. Russia demanded that Mariupol surrender, with a deadline of 5 am Monday. Kyiv responded that there was “no question” of a surrender. What is already a humanitarian disaster in Mariupol, with many of the residents without food, water or power, could get even worse.

In the south, the Russian advance to Odessa has also been halted because of a successful Ukrainian counterattack in the city of Mykolaiv. As of March 20th, Russia is reportedly preparing itself for a “long war,” and the Kremlin is considering draconian conscription measures to support its war efforts. This is anathema to Russian military doctrine, as the mounting losses should have indicated the need to pull out and develop a new plan to continue the operation while supporting proxy fighting.

It now seems unlikely that Russia can fulfill its long term military objectives in its invasion of Ukraine. A stalemate over the next few days is far likelier, accompanied by constant shelling of Ukrainian cities.

Despite the mounting attacks, diplomacy is still ongoing by both sides. Over the last few days, President Zelenskyy has conceded that Ukraine will not join NATO, which was one of Russia’s key demands. The ongoing territorial disputes between Russia and Ukraine alone make that impossible. Zelenskyy however, has demanded security guarantees from countries such as the US, UK and Turkey. In order to prevent a new, failed Budapest Memorandum, such as that which Ukraine signed in 1994, Zelenskyy is demanding a legally verifiable agreement with major powers guaranteeing Ukraine’s security.

Russian and Ukrainians negotiators are currently haggling over neutrality and demilitarization for Ukraine, which has been rejected by Ukraine. President Zelenskyy’s top adviser, Mykhailo Podolyak, dismissed the neutrality suggestion, instead requesting security guarantees. After the current Russian aggression, Ukraine is not willing to cede to Russian demands for Ukraine’s demilitarization and neutrality.

Russia is also demanding that Ukraine acknowledge Crimea as part of Russia, and the Donetsk and Luhansk People’s Republics as independent states. This has been flat out rejected by the Ukrainians, slamming such territorial demands from Russia as unacceptable.

In general, Russia’s demands are difficult for Ukraine to accept, and it is hard to be optimistic about future negotiations.