The role of religion in Russian aggression 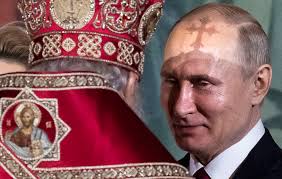 This is not the first time we’ve witnessed religion playing an important role in a conflict, as it does in so many other aspects and events in a society. Religions and religious theories have often contributed in significant ways to the development of cultures and societies. For instance, the decay of Roman culture was accelerated by the rise of the Ottoman society and Islam (alevism), which countered Catholicism and the Romans. Considering more contemporary history, Pope Giovanni Paolo II played a fundamental role as mediator in the fall of the Berlin Wall.

The intrinsic role of religion is now influencing the Ukrainian conflict, in both a positive and negative sense.

Ukrainian orthodoxism has been tightly linked to Moscow. There are 12,000 places of worship in Ukraine that are linked to Kirill’s Patriarchate in Moscow. Still, the current events are turning the religious tides of Kyiv, suggesting that it is time for the beginning of a schism in the Orthodox Church. Father Job Oshaanskyi, abbot of the Holy Resurrection monastery in Lviv, was the first to announce this to his faithful: "It was not an easy decision. I lived under the Moscow Patriarchate for many years. But I have been thinking about it since the first day, since 24 February. I can no longer be with a church that blesses war."

There is growing grassroots pressure on Patriarch Kirill to distance himself from Putin. But any possible Kremlin victory over Kyiv would pave the way for the patriarchate's religious expansionism.

What we no longer thought possible for Christians has happened in the 21st century. There is a new war that has been sacralised, and religion has been invoked as justification for the conflict.

Only the Metropolitan of Kyiv Onufrij, member of the Russian Orthodox Church, asked Putin "to stop the fratricidal war that has no justification either for God or man!", insisting that there is no enemy to destroy. Onufrij represents the part of the Ukrainian Orthodox Church that is still faithful to the patriarchate of Moscow, unlike the part declared autonomous by the patriarch of Constantinople and represented by Epifanij of Kiev.

The war in Ukraine is tearing apart the already divided Christian Churches in the area. It is a history of “schisms” and disputes, and of an ecumenical path that never changed from the status quo. Now, with the bombs dropped by Russia on Ukrainian cities, the Orthodox world is quaking.

The Patriarch of Moscow and all of Russia, Kirill, since the beginning of the conflict has spoken only a few times, bouncing from brutal speeches to random pledges of peace. He never called into question the actions of the Kremlin, to which the Patriarchate is closely linked historically. He now seems to be more isolated. According to the former editor-in-chief of the Patriarchate's magazine, journalist Serghei Chapnin: “The Russian Orthodox Church, by supporting the war, has lost Ukraine and risks finding itself in international isolation in the Christian world.”

Chapnin continues by highlighting that “we are witnessing the complete moral collapse of the Patriarch and the entire episcopate of the Russian Church: not a single bishop in Russia has publicly condemned the war, thus confirming that the Church is in a position subordinate to the State and does not have and does not wish to have an independent voice.” As a matter of fact, there is a loss of confidence in the Patriarch by some parishes outside Russia and Ukraine: some have reduced or even interrupted the fellowship to Patriarch Kirill as a sign of solidarity with Ukraine, and parishes have already announced that they will leave the Moscow Patriarchate — such as Nikolsky in Amsterdam, one of the largest Russian Orthodox parishes in Western Europe.

Now, Kirill seems less worried about the consequences of his position, possibly because there is no coming back from Putin’s recent actions. Recently, he has spoken to the 90 million religious followers by saying:

“If we see Ukraine as a threat, we have the right to use force to ensure the threat is eradicated [...]. We have entered into a conflict which has not only physical but also metaphysical significance. We are talking about human salvation, something much more important than politics.”

It’s an attitude that harkens back to the time of the crusades. Or even worse, to a time when a German dictator perpetrated one of the worst ethnic cleansings in human history.

For historical reasons, there is a huge community of Russian Jews living in Israel, while in Ukraine there are estimated to be at least 50,000 Jews — including President Zelensky. The war has been condemned by the Hebrew community of New York, by many Israelis, and it is provoking feelings of dejà-vu in Judaic communities in Eastern Europe. Five thousand Jews were recently forced to leave Kyiv, and they are now facing the possibility of a new life as refugees, as previously seen in Jewish history.

“Israel has a moral obligation to try to put an end to human suffering in the war in Ukraine.” These were the words with which Israeli Prime Minister Naftali Bennett opened the cabinet meeting last Sunday. Despite that, Israel has refused to sell arms and technology to Kyiv so as not to upset Russia. It’s an attitude that prompted Zelensky to openly challenge the Israeli government. Even in Russia, the Jewish community pledges to work for an end to the conflict. Rabbi Berel Lazar, the most important rabbi in Russia, as well as a close friend of Putin and leader of the Chabad movement, has reportedly begun to ask and lobby Putin for the end of the invasion.

Islam is a minority both in Russia and Ukraine, which may hint at how fragmented are Muslims and their opinions in this conflict. On the ground, they’re fighting for and against both Russia and Ukraine. Chechen militias of Islamic heritage are supporting Putin and the Russian Patriarch Kirill. Remember that Chechen Islam has a conservative understanding of the Qur’an, putting themselves at the antipodes of musulman illuminism and progressivism.

In the Crimea (illegally annexed by Russia in 2014, and still disputed by Kyiv), the Muslim faction is capable of involving several different players and rekindling the ancient rivalry between Russia and Turkey.

"For us, it is extremely important to defend the presence of our blood brothers in Crimea," said Anatolian Foreign Minister Ahmet Davutoğlu on 6 March of 2014, the anniversary of the illegal referendum to annex Crimea, pushed by Russia. “The Tatars are the original inhabitants of the peninsula, the masters of those lands. In Ukraine they lived as equal citizens, in peace, and Turkey will stand up for their rights.”

That the Tatars, Turkish-speaking Muslims from the Crimea, lived in peace and as equals during Yanukovich's presidency and previous presidencies in Ukraine is questionable. What is indisputable, however, is that most of them do not jump for joy at the prospect of annexation with Russia.

Despite the chilly relationship between Pope Francis and Patriarch Kirill, they recently had a video call that suggested optimism. In this communication, the Pope offered his help to Kirill, who only had to “make a call and I’ll be there,” according to Vatican representatives.

Catholics are only about 1% of the 140 million Russian inhabitants, with a strong Orthodox majority, but there is a large proportion of Russian priests from Ukraine. Most Catholics in the Russian Federation are of foreign origin, mainly Poles, Lithuanians and Germans. But the spiritual vacuum left by the communist regime has led to a growing number of people taking an interest in the Catholic Church, and a certain fear on the part of the Orthodox of a possible explosion of conversions to the Church of Rome.

About a thousand years have passed since the final separation that occurred with the great schism between the two churches of East and West. But the great leap forward to heal the wounds of the past occurred in 2016, in the first major historic meeting in Havana between Pope Francis and Patriarch Kirill of Moscow, which confirmed Francis' interest in dialogue and in building bridges of brotherhood with other religions.

So, are there any conclusions to be drawn? Maybe from a simplistic point of view, we can say that Putin’s acts and willingness are isolating Russia from the religious point of view, other than the economical, social and political aspect. This isolation created by Putin reflects on Patriarch Kirill and Russian Orthodoxy. But as we have seen in the Islamic case, subcategories of ethnics and minorities still have the chance to voice their will and mix the cards on the ground.

Conflict is mostly driven by interests, of course, and the bond between Kirill and Putin is proof. The Symphonia established between the spiritual and political parts of Russia may well be the only bond that will last until the conflict ends. Once again, this is not a last minute effect, but a well-planned road map instaurated by Putin in 2007. His scheme to reignite symphonia began at a ceremony in Moscow in 2007, when Putin hosted the signing of the Act of Canonical Communion with the Russian Orthodox Church Abroad — all of it depending on Kirill’s will and cooperation from that moment on.