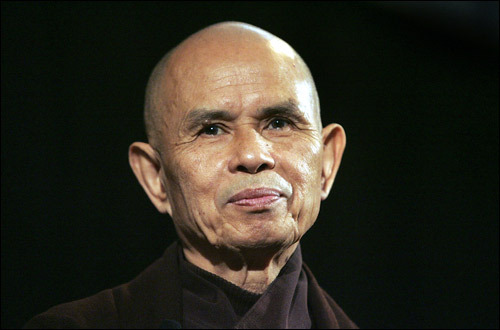 In August of 2002, I attended a teaching of the renowned Vietnamese Zen master and Buddhist monk, Thích Nhất Hạnh. It was an experience I’ll never forget.

The event was a week-long retreat on mindfulness at Stonehill College in Massachusetts. What impressed me from the start was that this remarkable man did not offer his teachings from a podium or a lectern. Upon entering the stage, he quietly walked to the front of the stage, sat on the edge with his legs dangling over, and spoke to us as if in his living room. His teaching was profound.

Thầy, as he was reverently known, was not only a spiritual teacher, but poet, author and social activist. He was considered the father of mindfulness, and of socially engaged Buddhism — the application of Buddhist ethics and teachings in alleviating suffering and remedying social and political injustice. He was far from passive in applying the teachings.

Because of his outspoken opposition to the Vietnam War, he was exiled from his own country for 39 years. And it was for that opposition that Martin Luther King nominated him for the Nobel Peace Prize, saying: "I do not personally know of anyone more worthy of the Nobel Peace Prize than this gentle monk from Vietnam. His ideas for peace, if applied, would build a monument to ecumenism, to world brotherhood, to humanity."

After suffering a severe brain hemorrhage in 2014, Thích Nhất Hạnh returned to Vietnam and lived at Từ Hiếu Temple near Huế, where he had received his earliest spiritual training. He lived there until he died last week at the age of 95.

I have a disciple in Vietnam who wants to build a stupa for my ashes when I die. He and others want to put a plaque with the words, “Here lies my beloved teacher.” I told them not to waste the temple land.

I suggested that, if they still insist on building a stupa, they have the plaque say, “I am not in here.” But in case people don’t get it, they could add a second plaque, “I am not out there either.” If still people don’t understand, then you can write on the third and last plaque, “I may be found in your way of breathing and walking.”