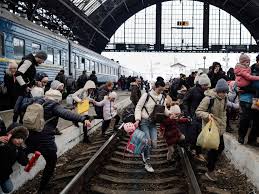 The Russian invasion in Ukraine, as anticipated by Vladimir Putin, was to be a proper “blitzkrieg” — a fat war of maximum 3 days. The rapidity with which Moscow deployed its forces required the Ukrainian forces and Atlantic allies to respond quickly. The counter response involved not only Ukrainian military force but also a humanitarian response. The rapidity with which the aggression developed created a big obstacle in the organization and allocation of humanitarian aid.

Ukraine could do little to provide humanitarian aid to its citizens. It was short on supplies and forced to focus on the military response, mandatory conscription, and distribution of weapons to citizens. Therefore, support from third countries and entities was much needed. International organizations struggled to deploy pragmatic means of humanitarian aid, as the multilevel and highly structured nature of international organizations brought delay in responding to a humanitarian crisis that was already peaking.

In the case of foreign countries, they arranged to quickly provide Ukraine with aid. But their support prioritized funds for weapons and military aid, leaving few breadcrumbs for those who are suffering the most, i.e., the Ukrainian people. Highlighting that is not meant to put in a bad light the aid of foreign countries, but only to clarify their priorities. Let’s consider the Czech Republic and Poland, two countries close to both the conflict area and the Russian borders.

On one hand, we’ve seen a comprehensive response from Prague, which provided both military and humanitarian aid. The Czech Ministry of Defense was among the first to donate support for Ukraine, approving on the 26th of January $1.6 million worth of lethal military equipment. Later they provided more military support, with $8.3 million in lethal military aid, followed by another $17.7 million for the same scope, and finally $2.7 million worth of lethal and medical military equipment in the first week of March. It was an expensive response balanced by their effort in also providing humanitarian aid. On the 25th of February, Prague donated $66 million in accommodations, food and hygiene products for Ukrainian refugees, later adding another $13.2 million of humanitarian aid.

Conversely, the Polish response has been more focused on military donations. It has encountered major issues in addressing and delivering humanitarian aid, possibly because it is not a priority for the government. On the 25th of February, Warsaw already supported Ukraine by giving bullet air defense systems, helmets, vests and weapons. Poland was also the very first country to offer currency swap with Ukraine, on the day of the invasion.

Within this complex context, international organizations are struggling. As noted by Oleksandr Vlasenko, a media relations officer for the International Committee of the Red Cross (ICRC): “It was difficult to immediately deploy our teams to provide assistance where it was needed[..] Therefore, we focused on providing assistance in those places where our teams were already present, in the Donetsk and Luhansk regions.”

This can be frustrating to those on the ground in other areas of Ukraine with very urgent need of life-saving humanitarian assistance.

Other organizations are in an even worse position, because they never faced such issues in the Ukrainian area. As referred by Jakob Kern, deputy chief of staff for the World Food Programme:  “We are starting from scratch in a time of heightened conflict”.

It seems that they have no clue on how to quickly develop and apply strategies for all that is needed right now.

This asymmetric organization and development is putting at risk the safety of refugees. Considering Poland once again, we see that not every refugee is equal or welcome. The demonstration of kindness towards Ukrainians is incredible, but it does not extend to civilians who are temporary Ukrainian residents, or to people who are there escaping from other wars.

Remember the recent case of the Yazidis, where families were forced to live in small tents in sub zero temperatures on the European border, without permission to enter the EU and seek refuge. Remember also the Syrian and Kurdish refugees who were caught by Polish border guards and violently (and illegally) sent back to an uncertain future  in Belarus.

If Russia's aggression on Ukraine continues, we may then see whether more effective (and more humane) aid systems are developed, or if the challenges deepen as the refugee numbers grow.

Filters
Tweets by RedCrossUkraine
Support the Team Behind This Report